Presented by the School of Humanities and Communication Arts at Western Sydney University in association with Casula Powerhouse.

The Research Creation Showcase 2022 is a free and immersive full day/up late festival experience aimed at connecting the community with Western Sydney University’s most dynamic creative makers and thinkers. It’s an all day, into the night happening of creative thinking, making, knowing and fun.

Headlining this year’s event is 2022 Archibald Prize winner Blak Douglas. A graduate of Western Sydney University’s Design program, Blak Douglas will talk about his creative practice and his journey as one of Australia’s most important artists. He’ll also participate in interactive activities across the day.

Blak Douglas’ talk will be followed by a series of free artist-led workshops. The afternoon session includes short talks by Western Sydney University creative thinkers and makers, and a panel on art, voice and activism led by award-winning filmmaker Dr Wendy Chandler, featuring Blak Douglas and Timorese film producer Lurdes Pires. The discussion will form the basis for the launch of Dr Chandler’s collaborative online documentary and associated photographic exhibition Mobile Stories, an innovative multimedia project that documents the stories of young social change makers in Timor-Leste and Western Sydney. The night kicks into party mode with music performances and the launch of an important new film about one of Australia’s most important jazz musicians, Roger Frampton, written and directed by his daughter Emily Rytmeister.

So come along and meet, talk, learn, dance and mingle with your local University – Western Sydney – and the School of Humanities and Communication Arts.

The full day/night event will be split into 3 ticketed sessions. Please click on each link to book for the session you would like to attend. If you would like to attend the whole day please book all 3 sessions, these can be added to your cart in the same transaction. Below is the breakdown of the sessions and what you can expect from the fabulous performances and presentations.

*Note registrations for the artist led workshops will be open on the day from the counter at Casula Powerhouse. Please register your interest, places are limited. 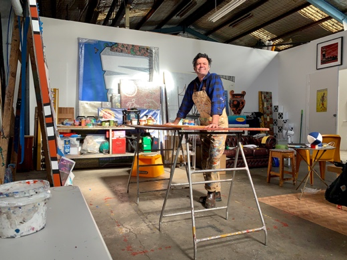 Image: Blak Douglas in his studio, courtesy of the artist

Following the Welcome to Country, the morning session features Blak Douglas in conversation with Western Sydney University design educator Dr Alison Gill. Blak Douglas was awarded the 2022 Archibald Prize and is a graduate from WSU’s Design program.  His work is influenced by photography and illustration and is noted for its focus on social justice. His work is also on exhibit in the Casula Powerhouse.

The keynote is followed by a series of artist-led workshops on cultural rituals of care; art, science and water ecology; creative writing and place; art and activism; and on the Powerhouse's 2023 Flight exhibition program. 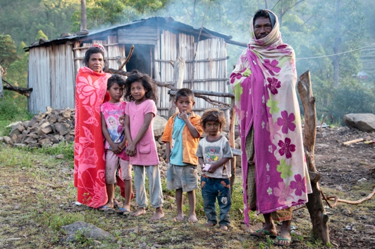 The afternoon session includes lightning talks by WSU creative researchers focused on a range of different arts practices. It will be followed by a discussion panel on Art and Voice, led by creative researcher and award-winning filmmaker, Dr Wendy Chandler, featuring Blak Douglas and film producer Lurdes Pires. The afternoon concludes with the launch of Mobile Stories – a collaborative, interactive online documentary focused on Timor Leste and Western Sydney, involving creative contributions from Western Sydney University's Humanities and Communication Arts students, produced by Dr Wendy Chandler. The launch incorporates the Mobile Stories - Street Life exhibition, a curated selection of works from the online photography galleries featured in the documentary. 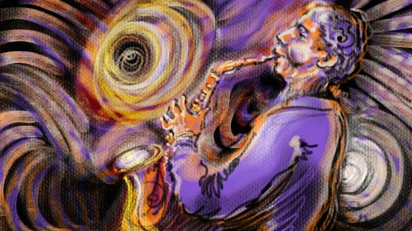 The after-dinner session will feature the premiere of Dr Emily Rytmeister’s documentary, ‘Roger Frampton Comes Alive!’. The film is both a musical journey and biography through the life and times of Sydney-based prolific jazz composer and performer, Roger Frampton. Made by his daughter, Emily Rytmeister, this film recalls Roger Frampton as a musical genius and great exponent of jazz experimentation of the late 20th Century. The film is bookended by two musical performances: the first, a jazz trio featuring some of the musicians featured in Emily’s film; the second, a quartet, Giraffe Quartet led by WSU’s Dr John Encarnacao.

This collection, Fiji’s Pacific Fusion,by Hupfeld Evers Hoerder is an integration of our unique Pacific culture in Fiji. This line also showcases the plus-size category that is dedicated to the beautiful men and women of the Pacific. It is decorated, accessorised and hand-painted with the vibrant colours of the Pacific’s flora and fauna, deep blue sea to turquoise lagoons and the lush green vegetation of the coconut palms to celebrate ‘Pacific fusion’.

In conjunction with the theme, Fiji’s Pacific Fusion, the collection is inspired by Hupfeld Evers Hoerder’sresearch project in sustainable fashion and Indigenous fashion, i.e., to produce garments that have a low impact on the environment and to promote the preservation and conservation of culture and heritage in the Pacific.

Hupfeld Evers Hoerder is from the beautiful Fiji Islands. He is Rotuman-German origin and raised in Fiji. He has worked in the fashion industry in Fiji for over 30 years. He began designing while pursuing his undergraduate studies at university, making simple shift dresses to casual resort wear. Slowly the demand grew for more formal gowns and bridal wear. Hupfeld Hoerder designs promotes a strong sense of Pacific culture to resemble who he is and this is to promote conserving one’s identity and heritage that is so important to those in Fiji and the Pacific. 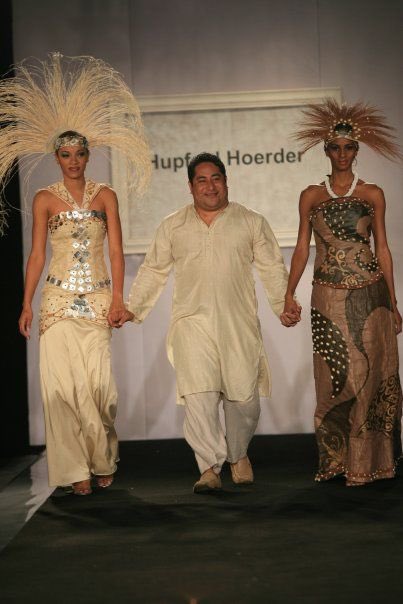 Films will play in the Theatre at set times across the day. 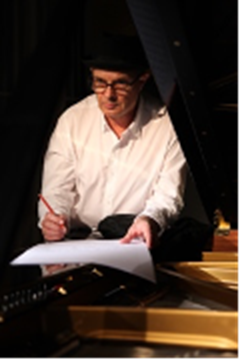 For the film Gyeonggye, the concept is a type of travel metaphor (not literally) but with Korean traditional Gugak performance movement through physical locations of arches, gravestones into the hidden bush within a London cemetery (Abney Park in Stoke Newington). The idea is to move from hidden beauty within the bushscapes of the graveyard into skyward ascendance, and slowly return to arches/gravestones/hidden bushes within the cemetery as ‘grief reflection’ and ‘healing’. The colour comes through gently as abstractionist painting approaches to show some burgeoning moments in nature as a metaphor to suggest healing processes amidst grief. 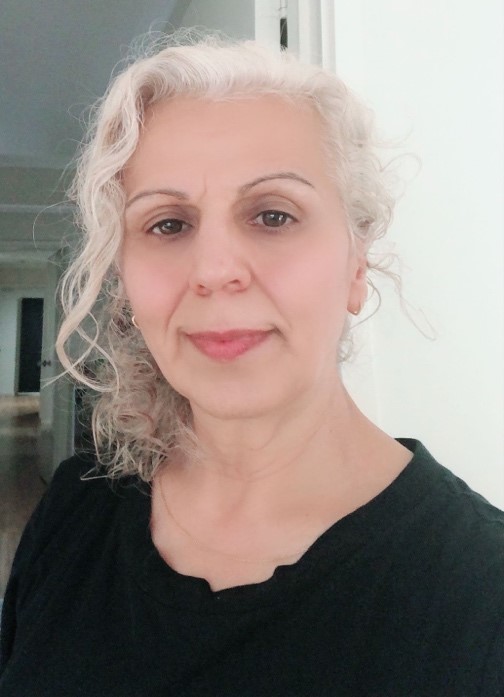 Cinema Beyond Borders is a feature-length documentary film about the contextual factors which shape Kurdish cinema and its identity. Cinema, in the Kurdish regions, gained momentum as a mechanism to voice the concerns of the Kurds and strengthen Kurdish identity in art. The film’s narrative unfolds through an analysis on past Kurdish films and film directors and the current stage of this endeavour.

Artist bio: A filmmaker and film scholar on Kurdish cinema, Tania fled Iraqi Kurdistan in 1993 to Turkey as a refugee, was accepted, under the UN migration program, came to Australia by August 1995. Since then have been involved in many different Kurdish cultural activities such as film festivals.

During my time in Australia I  have traveled to Iraqi Kurdistan quite a few times and worked on producing and directing documentaries. In 2008, graduated with a Bachelor of Arts from Deakin University, which was involved in the production of several experimental and short films during my course at Deakin and outside. Completed my Master of Film and Video at Deakin University. Tania graduated from WSU with  a Completed Doctor of Creative Arts in 2022. 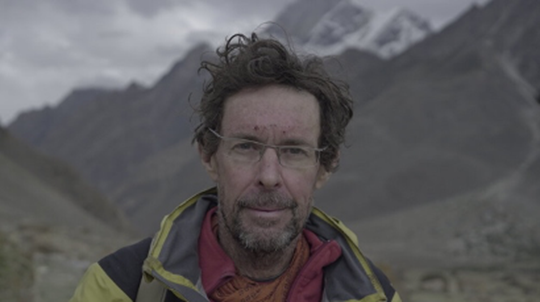 Picnic Places is another take on Roadside Picnic by Arkady and Boris Strugatsky in a more benign place than Tarkovsky portrayed in Stalker. It's about leftovers and signs in the landscape and missing pieces of information that have to be interpreted anew. Seen from the distant future, all pasts may go this way. Landscapes are invaded and reinvaded, with new searchers, who bring with them their own ways of interpreting,  while leaving a trail of busted plaques.

Artist bio: Robert is a DCA candidate in the Institute for Culture and Society, WSU. Robert has made three feature length documentaries, as well as commission films for NGOs and TV. His film, End of the Rainbow (a co-production between France and Australia) won the first appearance award at IDFA in 2007 and went on to screen at major festivals around the world. 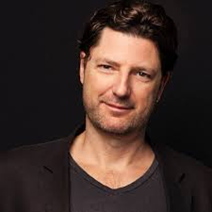 Nature Calls the Shots is a 37-minute observational documentary film produced and directed by Juan Francisco Salazar that offers a glimpse into the life and work of pioneer permaculture designer and educator Robyn Francis, and the story of Djanbung Gardens in the community of Nimbin, northern New South Wales, Australia. Documenting a unique microcosm of an exceptional permaculture community on Australia’s north- east coast, Nature Calls the Shots presents Robyn Francis’ herstory as an activist for environmental regeneration and novel community economies who transformed a small piece of land from a degraded cow pasture in the 1990’s into to permaculture paradise. 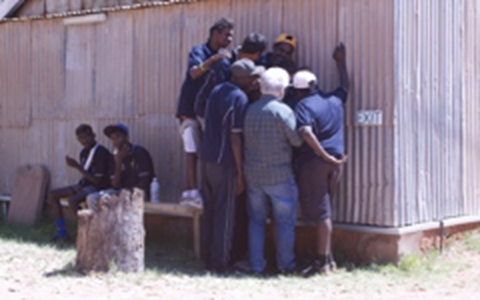 Ntaria Heroes is a community collaborative project made with the students, teachers and researchers based at Ntaria (Hermannsburg) and Alice Springs. Students from the Ntaria School visit the Strehlow Research Centre under the guidance of elders and with the assistance of Aboriginal researchers. They are shown genealogies (family trees) going back three generations and photographs of their ancestors. This visit is extended by a day spent at the historical precinct of Hermannsburg - a former Lutheran mission. Here the students visit heritage buildings including an old church where community members of an older generation were baptised and married. The students are then invited to visit a Dreaming track belonging to one of the elders who provides a more direct experience of the spiritual connections made through the photos, family trees and old mission. 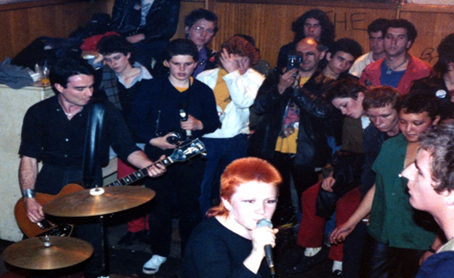 Distorted: Reflections on early Sydney punk explores the recollections of participants who were part of a cohort associated with a small punk venue known as the Grand Hotel which operated at Railway Square, Sydney, between 1977 and 1979. While Australia’s first-wave moment has been increasingly recognised within a growing body of literature on punk it has been considered almost exclusively in a music context. The film forms the creative component of a study that emphasises the sociality of punk subculture which has been largely absent from the record.

Artist bios: Des Devlin Des is a graduate of Sydney College of the Arts, University of Sydney, where he majored in photomedia. He holds a masters degree from Charles Sturt University in ethics and legal studies, specialising in media ethics and media law. He completed a Doctor of Creative Arts degree at Western Sydney University which focused on research methods in visual ethnography and post/subcultural theory.

Ticket bookings are broken into 3 sessions.

Jump to info about;