HART has two sessions: 11am & 7:30pm
As part of our Equity Program, get FREE tickets to this performance. Simply click on the Book Now link and book your free tickets.

“I was always like, like a magnet with my Dad, like everywhere he went I was right next to him… He never got rid of me…”

Throughout Australia’s history, an unknown number of Indigenous children have been forcibly removed from their families. Parents driven mad, grandparents heartbroken, siblings torn apart, language lost, and culture stripped away.

Using testimonials from the Stolen Generations, Noongar man Ian Michael invites you to listen in on the silenced stories of his country.

Please be advised that there will be a LOCKOUT period for the show. You will be unable to enter or leave the theatre after the show has commenced. If people leave mid-performance they are not permitted back in. This is due to the sensitive nature of the show and we make no exceptions.

Apologies that Bellbird can’t be open for the evening’s performance of HART. The small but enthusiastic team (of two Chefs!) behind Bellbird are open 7 days a week for Breakfast, Brunch and Lunch and we try to add on dinners when they can, but that isn’t always possible. We are hoping to create an Apprentice Chef position in the not-too-distant future that should mean we can add more dinners to more events… but we’re just not there yet!

Thanks for your understanding – Federico & Steven

‘Beautiful, heartbreaking and liberating storytelling... A story about us and now.’ - Anne-Marie Peard, AussieTheatre.com
‘A brave and quietly devastating performance...Moving theatre that handles some emotionally harrowing material with dignity and grace.’ — Cameron Woodhead, The Age 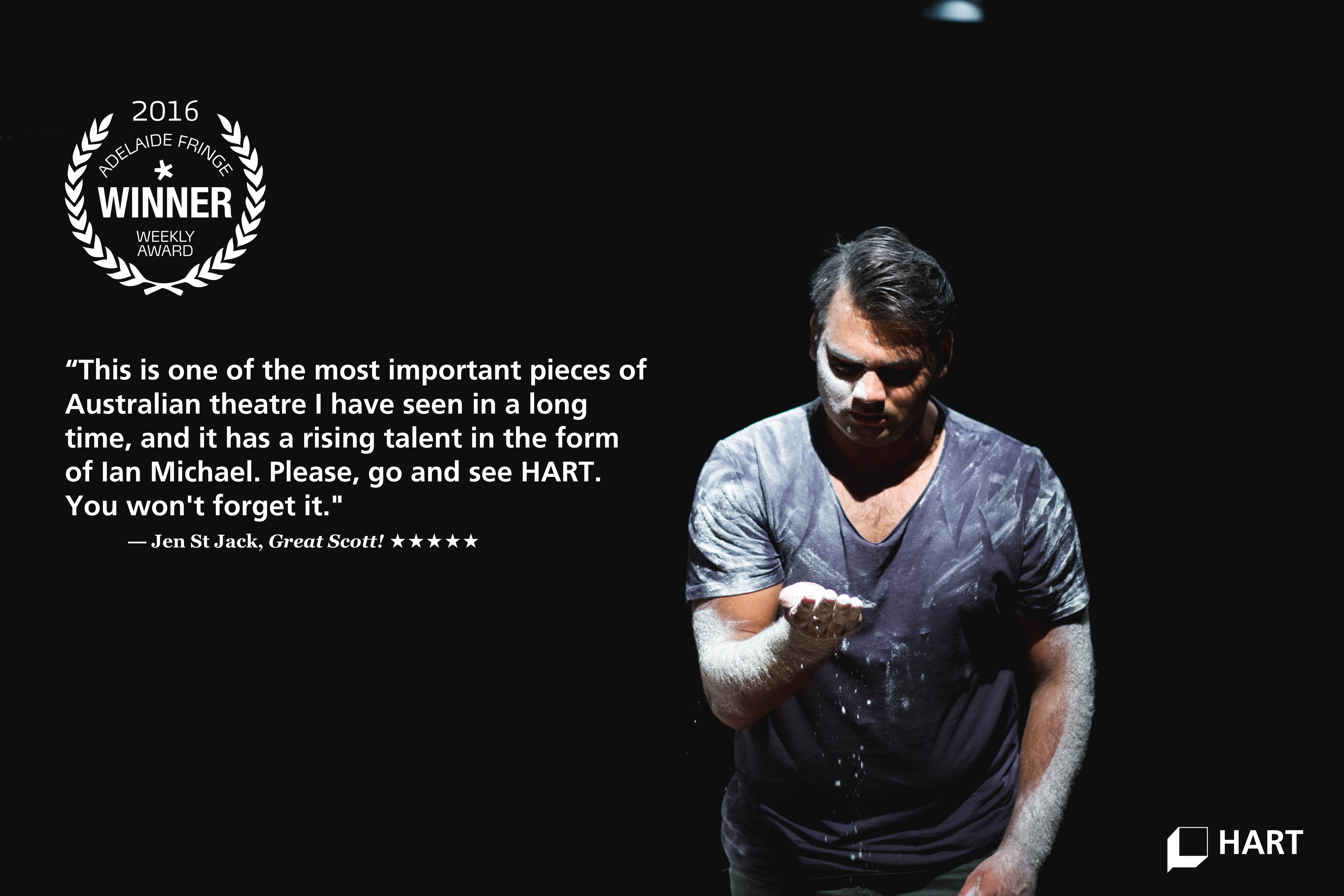 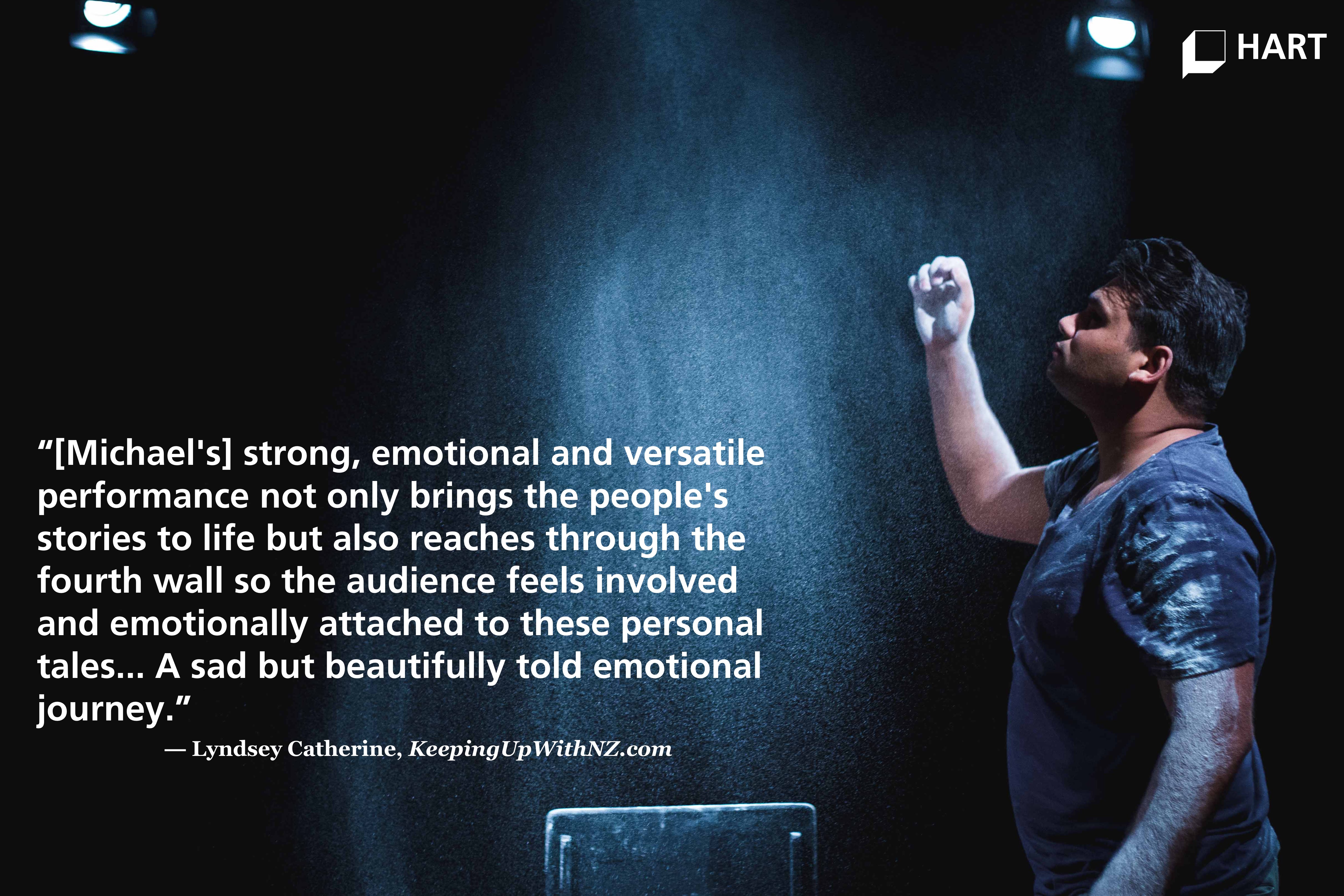 She Said Theatre uses performance to explore alternative histories, re-imagine forgotten stories, and encourage a theatrical dialogue with the unheard voices in Australian society. Founded as a direct response to the lack of women in theatre, we aim to create more active roles for women and other under-represented artists in the performing arts, and provide opportunities for such artists to realise their skills in acting, directing, writing and design. We have developed a process of working that focuses on emotional truth and the power of live performance, creating text-based theatre from the “ground up” that is dynamic, immediate, and experientially engaging, that activates young, culturally and geographically diverse audiences outside the usual theatre-going demographic. Currently based in Melbourne, Australia, She Said Theatre was founded in 2006 by co-Artistic Directors Penny Harpham and Seanna van Helten.

Penny Harpham is the co-founder and Co-Artistic Director of She Said Theatre. She is a recent Directing graduate from the VCA where she was awarded the Barbara Manning Scholarship for Excellence and the Global Atelier Scholarship for Overseas Travel. She won a Green Room Award for The Stream/ The Boat/ The Shore/ The Bridge (Next Wave Festival 2012) and received an Ian Potter Cultural Trust Award (2015) to complete residencies at the ZK/U in Berlin, Mullae Arts Space in Seoul, and intern with TheaterRampe in Stuttgart. Her directing credits include The Way Out (Red Stitch Actors Ensemble), Salt (La Mama Theatre andShe Said Theatre), Fallen (She Said Theatre and Sport for Jove Theatre at the Seymour Centre), Bock Kills Her Father (She Said Theatre at La Mama), Laika and Wills, Breaking (She Said Theatre at Melbourne Fringe) and Slut (VCA). She has performed with theatre companies and artists across Australia, Germany and South Korea, including Red Stitch Actors Ensemble, Elbow Room, Plathoon Kunsthalle, Brisbane Powerhouse and Motherboard Productions. Penny is a teaching artist for Western Edge Youth Arts and a youth workshop facilitator with Footscray Community Arts Centre.

Seanna van Helten is a writer and co-Artistic Director of She Said Theatre. Other works include: Salt (She Said Theatre/La Mama Theatre 2017), Fallen (She Said Theatre/Sport for Jove Theatre Company 2017); Laika and Wills (She Said Theatre/Melbourne Fringe 2013); and Breaking (co-authored and co-directed with Penny Harpham, Melbourne Fringe 2012). Seanna has also published writing in Griffith REVIEW, Voiceworks, Milk Bar Mag, and is the former Arts Editor of Brisbane’s Rave Magazine. She is a graduate of the University of Queensland and of the University of Melbourne, where she received the Percival Serle Prize. In 2014, Seanna completed the Master of Writing for Performance at the Victorian College of the Arts. In 2016, she was selected by Playwriting Australia for the National Script Workshop, invited to be a writer-in-resident with Lonely Company, and was a recipient of the Australia Council ArtStart grant.

Michael Carmody (www.vimeo/carmody) has designed video for productions that include Bare Witness (Mari Lourey/Nadja Kostich), I Call My Brothers (MTC), The Waiting Room (MTC), I Saw The Second One Hit (St Martins) Detroit (Red Stitch) and Chapters From The Pandemic (Angus Cerini) for which he received a Green Room nomination. His short films include Debutantes which screened at MIFF 2005 and Carpark which was a finalist at the 2000 National Student Film and Video Festival. In 2013 and 2014 he was filmmaker and video artist on the public art installations Spinning Yarns and The Locker Room, both for the City of Knox. He was also a collaborating artist with Nadja Kostich on the Monash University - Bachelor of Performing Arts: Third Year Production Raid. In 2015 his collaboration with Elissa Goodrich Dusk To Dawn: Devolving screened at the 18th Traverse Video Festival in Toulouse, France and his short film Drowning World screened as part of La Trobe University’s Centre for Creative Arts Nature in the Dark II project.

Kate Brennan is a Brisbane-based stage manager and production manager. Most recently she joined She Said Theatre as the touring stage manager for their award-winning production HART, and prior to that was venue manager for "The Black Flamingo" at Perth's Fringe World Festival. She holds a Bachelor of Performing Arts and a Masters of Arts Management. Stage management credits include: F. (Poppyseed Festival, 2016), Conviction (Darebin Speakeasy, 2016), Triumph (fortyfive downstairs, 2016), The Motion of Light in Water (La Boite, 2015), Richard II (Brisbane Festival, 2015), Virgins and Cowboys (Theatreworks, 2015), MKA's Double Feature (MTC, 2015).

Gabi Briggs is a Koori woman from the sovereign Anaiwan and Gumbangier peoples and has been raised on country in Armidale. NSW. She relocated to the unceded lands of the Wurundjeri people where she completed her Bachelor of Fine Arts at RMIT. Gabi works primarily with photography but also works within different mediums such as video and performance, and is a co-editor of the Sovereign.